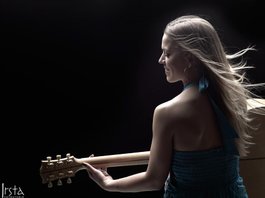 Her first paid gig was in 1987 and she's been working non stop ever since, enjoying every second of it. What an unbelievable joy it is to be able to get paid for what you love the most.

Alexandra Maria Elisabeth Jardvall was born April 23rd in 1974 and raised in a small suburb in the outskirts of Stockholm. She grew up with both her parents, an older brother and an older sister. Her father, a controller, and her mother, a school principal, were happily married until the day her mother got cancer. Alexandras father didn’t cope too well with the disease and started spending time away from home, so her mother and grandmother were responsible for the most of the upbringing of the siblings.

As a child she tried gymnastics, swimming and football, but being called a ”refrigerator” made her leave the sports and follow into her sisters footsteps and her interest for music.

Her first love was Elvis Presley and she taught herself, on her departed grandfathers home made guitar, how to play. The following Christmas her parents gave her a turquoise Applause, an instrument she’s kept until this day.

Her "career" started in 1983 during singing competitions in middle school.

Alexandra’s sister, Helena, competed and when Alexandra was old enough, she entered as well. Her family ruled these competitions for five years!

Then came several smaller talent competitions and after a win in 1987 she got to record a demo. At this time she also met her band, Coast, consisting of four talented musicians, a lot older than her, who taught her a lot about music and the industry. This finally lead her to a nation wide talent competition, touring around all of the major Swedish entertainment parks, Folkparkernas Talangjakt, which she won - at age 16! (To be compared to today’s Swedish Idol)

Winning this one gave her many advantages and also funds to purchase her very first studio.

Even if there were difficulties within the family, both parents encouraged Alexandra to continue her singing and pursue her dreams.

There were a lot of record deals circulating after the national win, but Alexandra decided that school was too important not to attend, so she declined them all and continued making music on her own, in her spare time, instead.

There was something about all of the excitement around her, that made her back off. Alexandra was a private individual, not keen on becoming a celebrity. Her drive was to give her audience a time to remember and not to reveal herself off stage.

She attended the music college Södra Latin, together with other music makers like Max Martin, and after graduating in 1992, she became a music teacher. At college she met Lena Jinnegren and together they became the duo Lena & Alexandra that was active for over ten years.

During and after college Alexandra wrote music, played in different bands, attended radio- and television, she was a soloist in a choir called Ten Sing, she did an appreciated rock concert with Trio Me’ Bumba, performed as a street musician, performed for The Swedish Royal Family (as she was appointed the court singer of her municipality), she replaced Lizette Pålsson in the quartet Stage Four (Alexandra, Lena, Andreas Lundstedt & Peter Jöback), she played in a trio called Mama Moose, she sang in Globen for 15 000 people during Sthlm Venue and appeared in The Swedish Eurovision Song Contest during an Andreas Lundstedt performance.

But after a while of teaching both vocals and piano at a school, having private lessons, performing and touring, it all became too much, and in 1997, after five years of doing it all, Alexandra said goodbye to her students and Lena & Alexandra moved to Norway. They had a fantastic couple of years there and played nearly five hundred gigs for the Norwegians including huge gigs as The Sami Grand Prix. The duo also travelled to Kosovo and Macedonia, in 2001-2002, playing for KFOR soldiers.

In 1999 Alexandra returned to Sweden. Her sister was pregnant and wanted Alexandra close by. She brought all of her instruments to a flat in Åby, Norrköping, but didn’t have room for them all, so when a house, three doors down from her sister, was on the market, she bought it and built her own studio there. She still resides here, in Jursla, a village with 1700 inhabitants, working on her music daily. Since the move, Alexandra decided not to perform in her own area and instead “be a rock star away from home”, to be able to come home and live an anonymous and quiet life. Her dream was always to become a singer, a great performer and a songwriter - however the thought of being a celebrity was still not appealing.

In 2002 Alexandra started playing at the Viking Line ships. At first she did approximately one hundred gigs every year at sea and with that came a new audience - her Finnish audience. She had already conquered the audience of every pub and event in Norway and now she was invited to attend Finnish events and radio, any time she liked.

They simply loved Alexandra’s entertaining cover gigs based on the music from her influencers Elvis Presley, Robbie Williams, Live, Pearl Jam, Tom Petty, Emmylou Harris and the greatest love of her life – Bruce Springsteen. When she’d warmed up her audience with recognition, she continued with playing her own songs and now her followers were screaming for an album. She always said that she was going to make an album of her own, but when?

And then the day came, when an album was necessary, when the only way to handle grief was to make music. In 2003 cancer took her mothers life and a few months after, her grandmother followed.

In 2006, Alexandra was diagnosed herself - with endometriosis. A disease that effects 1/10 of the worlds female population. Leaving Alexandra with chronic pain.

And then her father unexpectedly passed away in 2008, also in cancer.

These years were dark and the only thing that brought Alexandra out of bed at times, was touring. She used writing music as therapy for her losses and wanted to show her fans that even if you’re ill – was doesn’t kill you, makes you stronger!

The result of the years above became her debut album As Good As It Gets, which was released in the end of 2009 (the title taken from Alexandra’s favorite film of all times). This country pop/rock release contains two covers, chosen by her family, and nine original songs. They are very personal and intimate and reveal her inner feelings from this hard period in time. She also started her own record label, Alexandra Music Studio 65, to enable the process. Guitarist, bass player and close friend, Richard Hauer, was her helping hand in making the album. The critics softened and called it “a welcomed debut”.

At the same time she wanted to spread the word, making people aware of how usual the condition of endometriosis was (and is) and what we can all do to help women in this position. So she took part in a study, in Helsinki. In Scandinavia there is generally no funds for this type of research, therefore she paid for everything herself. And she used her well-received music, to reach out. Maybe she could not help herself, but at least she would be a part of helping generations to come.

(To find out more, listen to a radio interview with Alexandra by Erik Blix from July 2015, broadcasted for P4 Rix)

After the first album both small and large gigs continued to roll in. She did an extremely spoken about performance, during the summer of 2011, as the pre act to the social democrat leader, Håkan Juholt’s speech during the yearly politician week in Almedalen. She touched Håkan to the extend that he could barely enter the stage afterwards. He dedicated time to her on national radio (Listen to the YouTube clip featured on this homepage) and as Juholt's career came to an end and Partiledaren som klev in i kylan by Daniel Suhonen was released, Alexandra’s performance was mentioned in the book.

That same year Alexandra entertained 24 000 people during Stockholm Midnight Run and later on she landed the gig of entertaining at The winter World Cup Biathlon in Östersund. She became a part of the constellation Stand-up c/o Music together with Swedish comedian, Jörgen Sjöberg, with whom she's done over 150 shows so far, combining music with stand-up.

All this time she had thoughts about a second album and she continued writing songs. However most lyrics was about sorrow and suffering and she didn’t want to produce another album like her first. But something came in between and the album had to wait.

She paused the making in order to let a very important single beat the level. Considering her strong connection to the many Norwegians she had met, she took  upon her the task to honor the victims and the entire Norwegian population, following the awful massacre in 2011. She started the year of 2012 with the release of Utøya In Memoriam: Vi Kommer Aldrig Ge Upp. A remarkable piece of music and the only song she’s released in Swedish.

Meeting a fellow musician in the end of 2014, the AOR singer Pekka Ansio Heino, known from the Finnish band Brother Firetribe, pushed a button. They started writing music, ten songs took only a few months, and they were great enough to appear on Alexandra’s next album – Aurora Skies. The pair never actually met during the whole of the writers process, instead they wrote songs via text and voice messages. The album was finally digitally released on September 1st 2016, with the actual song Aurora Skies, the titel track, being a duet with the two of them.

As with the first album, Alexandra cooperated with guitarist Richard Hauer, but she also brought along other giants from the band Hovet (Lars Winnerbäck’s band) – Norpan Magnus Eriksson, Jens Back, Henrik “Kisa” Nilsson and Richard Krantz.

As the perfect representative for her music genre country pop/rock, Alexandra sports jeans, lives the country life with her dog Teddy, she loves the occasional beer or whisky, makes her own music and plays only for the audience in front of her. Her gigs does not resemble the typical troubadour night, they are intimate. Off stage she is still a private person, but whilst in the limelight, she gets personal and up close in such a way, that she puts a spell on every individual she performs for. Her voice is warm, strong, husky and very well complimented by her playing the guitar and the harmonica.

In the music business she is appointed Sweden's answer to Sheryl Crow!

During 2017, Alexandra was touring the countries of Sweden, Norway and Finland, performing as the artist, entertainer and troubadour that she is, for audiences on the ships, in pubs, on festivals, ski resorts, company events and private parties. She will continue a project involving her local choir, Körgänget. And also a radio tour, to promote her recent album as well as a release party, for the physical record of Aurora Skies.

2018 has been the year of spring- and summer tours with the swedish artist MONEYBROTHER. Highly appreciated tours with all impressive reviews from the Swedish press. Duo Alexandra Jardvall & Pekka Heino also did their first round of touring onboard Viking Line.

Alexandra's been doing her own touring as well and is currently traveling all over scandinavia. Trips to USA, France and Iceland, was also on this years schedule.

She will  course continue to spread awareness and act as an ambassador for endometriosis affected women and try to ensure that the research will progress in Sweden, as this is a scourge that doesn’t get enough attention.